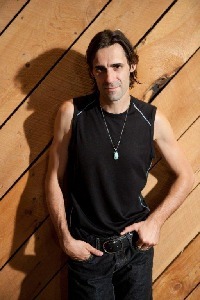 Tobias Ralph was born and raised in New York City. He began playing
the drums at the age of 4 years. His talents were quickly recognized
when he became the winner of the first Buddy Rich Memorial Scholarship award
while still attending La Guardia High School for music and the performing arts.
He also attended Berklee College of Music, where he was the first recipient of
the Yamaha Young Performing Artist recognition award. His first public
performance was at the tender age of 12 years old, while attending Walden
School in NYC, supporting none other than Chaka Khan under the musical
direction of Yochanan Sebastian Winston for a Walden School Benefit concert.

He has developed his own creative, innovative style as he has combined the
influences of many different types of music. An exceptionally consummate
player, his versatility is evident as he can play everything from jazz to pop to
speed metal.

Tobias has been privileged to perform internationally with a wide variety of
artists that include:

Tobias has also recorded with many of the above artists such as; Kif,
Tony C & the Truth, Nena, Janita, Royston Langdon, Defunkt, Doop Troop,
Janek Gwizdala, 24-7 Spyz, The Exotic Experiement and Medicine Stick.
Additionally, he has recorded with Tomas Doncker, Nick Howard, Angus Clark,
Susan Cagle, Everlast, Plexus, Vibrolush,Swirl 360, Root 66, Imani Coppola,
Pocket Size and many, many more. In addition, he has done studio sessions
with many producers/engineers, some of which include Bruce Hornsby, Steve
Thompson, Jay Levine, Steven Miller, Skoti Elliot. He has also recorded several
jingles, including two with with Tony C & the Truth for Coors Beer and Sherwin
Williams Paint.

Broadway/off-Broadway shows:
Tobias has performed many times as a substitute drummer for the Broadway
show “Rock of Ages” under drummer Jon Weber. Tobias was also privileged to
be a member of the award winning Broadway musical “Movin’ Out” under the
charge of drummer Chuck Bürgi in 2004 - 2005. He has also performed in the
touring version of “Movin’ Out”.

Advertisements:
He has been featured in National advertisements for DW Pedals, Paiste Cymbals
and Pro-Mark Drumsticks

Teaching/Clinics/Master Classes:
He is a faculty member at the Collective in NYC and teaches there when
he is not out on the road touring. He continues to give clinics and Master
classes.

Dance composition/performance:
Throughout his career, Tobias has also been very involved in the dance world.
He accompanied dance classes at NYU’s Tisch School of the Arts for six years.
He has composed several dance scores for Nicholas Leichter, Ann Reinking
(with Phillip Hamilton), Alisa Rasera and Aleta Hayes, which have been
performed nationally. “Ritmo y Ruido” (Rhythm and Noise), a piece he
composed with Phillip Hamilton, was performed nationally by Ballet Hispanico in
1998 and 1999, and received glowing reviews in the New York Times. It has also
been performed at The Joyce Theater in October 2008 and December 1998.
It continues to be a part of Ballet Hispanico’s repertory and is performed
internationally.

April 1999, Tobias received a glowing review in Modern Drummer magazine
for his drumming on the Dripping Goss album, “Blue Collar Black Future”
(CBGB Records). The reviewers proclaimed, “A virtual drumming clinic…suggests
that Tobias Ralph is possibly the quickest and most proficient drummer to
erupt from New York’s underground scene in a long time.”