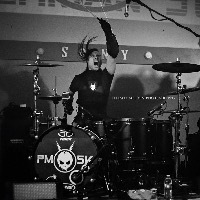 Former drum & bass dj and metal drummer, DJ:Rattan quickly made a name for himself upon diving into the LA rock & roll world. With roots in the SF thrash metal scene, Rattan is known for his heavy hand and precise timing while still maintaining a soulful groove. In addition to Powerman 5000 he’s pounded it out with fellow LA rockers, Cage9, I Am Demure and the Industrial rock group, Skumlove, and has sessioned for numerous other acts incltuding the electro pop-metal band, Otto’s Daughter. Rattan has toured nationally and internationally sharing the stage with impressive acts such as Ozzy Osbourne, Static X, Rob Zombie and Lords of Acid to name a few. Playing with Cage9, he headlined at the Miller Lite Extravaganza in Panama and Rock the Falls Festival in Utah, and shared a cruise ship playing alongside bands such as Buckcherry, Sevendust, Filter, Hell Yeah, In This Moment and many others on Shiprocked 2011.

In the summer of 2013, he became a full time member for Powerman 5000 and has been touring consecutively promoting their latest album "Builders Of The Future" (which features the hit single "How to be a Human") released on May 27, 2014 in the US and Europe, playing some of the biggest festivals including Download, Rock Am Ring, Grasspop & many more. His numerous accomplishments led him to endorsements with Trick Drums, Evans Drumheads, Xcel Drumsticks, Saluda Cymbals and Ultimate Ears.