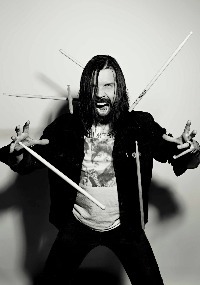 May was born in Raleigh, North Carolina, USA, but raised in Baltimore, MD. He is best known for playing drums (and subsequently bass) in Glenn Danzig's post-Misfits/pre-Danzig punk/goth band Samhain, which he joined in the summer of 1985. May played on the group's best known release, November-Coming-Fire as well as Samhain Live '85–'86 and the bonus tracks on the 2001 re-release of the band's last album Final Descent. During his long and continuing music career he has also recorded and performed with such popular artists as Tiger Army, Son Of Sam, Dag Nasty, Lee Ving, Pat Smear, Exene Cervenka, Cold Cave, Reptile House, Jackass star Chris Pontius, and Distorted Pony. London is currently playing drums with US Black Metal legends, Ritual.

London May began his acting career early in Baltimore's renowned Children's Theater Association. After a long break to pursue a burgeoning and successful music career, London returned to acting in 2010, studying improv at The iO West and classic theatre with Uranium Madhouse, where he made his 2014 Los Angeles stage debut in The Duchess Of Malfi. He has also co-starred in the pilot episode of Ron Howard's The Great Escape, and Cold Sweat, a short directed by James Cameron's DP Paul Babin. He has since gone on to act on TV and films for Disney, The Oxygen and Discovery Channels, and recently in The Tension Experience directed by horror icon Darren L. Bouseman (of "Saw" 2-4 fame.)
-