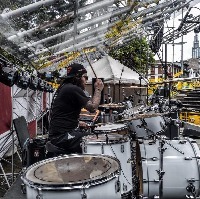 Esteban Diaz stared his musical career when he was 7 years old at the Universidad Nacional de Colombia , where he process for 6 years his first steps on percussion, focusing his career on drums, when he was 13 he initiated taking homeschool drum classes with the teacher Rafael Lopez which is a Colombian rock metal drummer specialized on the field.
In order to improve his knowledge on this area he started taking classes on the Gentil Montaña academy on 2005 where he found the guidance of his teacher Fran Calzadilla; it took 2 months for him to be ready to be admitted on the Universidad Distrital de Colombia (ASAB), finishing his studies in 2015, he graduated as a musical arts teacher with emphasis on percussion.
He focuses his studies on including different rhythms in rock and metal music, this is when he initiated a new project of power symphonic metal with a different format including piano violin and voices; on 2005 he named the band LEGENDS. His trajectory made the band to be invited to book fairs , SOFA, and concerts in Colombian territory, openings shows for national and international bands such as Kraken, rhapsody, zona artica and some other bands.
In 2008, he got in to the Thrash metal band called LUTHOR, participating in different festivals as well in Colombian territory, recording a live soundtrack of the metal warrior fest festival album.
In 2012 he got in to the DRUNK DOG band, a Thrash hardcore punk band (crossover) he also participated in festivals with an EP and a studio album; in 2013 he participated on the recording of an album called HUAYRA from the band of the death metal AYAHUASCA.
Due to his long experience in scenes as a metal drummer, he got in to the band PERPETUAL WARFARE in 2014, participating in the most prestigious national and international metal festivals such as : Festival de festivales Metal, Festival International Eje Rock, Festival Internacional Convivencia Rock Pereira, Mx3 Metal Fest, Festival Del Diablo 2, First Sourth American Warfare Tour (Colombia , Perú, Ecuador, Chile, Bolivia y Argentina) ; UsMetal Festival, Revolution Metal Fest, Rock Al Parque, Congregations Fest, Manizales Grita Rock, Urbana Rock, Metal Injection Tour (Pereira, Medellin, Santa Marta, Cartagena, Neiva) Death Come Whit Silence Tour Colombia (Bogotá, Pereira Medellín, Armenia) , SLAYER OPEN SHOW and some others. In 2018 the band lived in EE.UU in order to initiate a tour within three different countries and in one of the most important metal festivals worldwide called 70,000 tons, united states, Mexico and Colombia with more than 64 opening numbers.
The band will be invited to the FORCE FEST MEXICO 2019 y KNOTFEST COLOMBIA2019 festivals Their next production will be processed on New York city in one of the most important metal studios called SILVER CORD STUDIO.
-