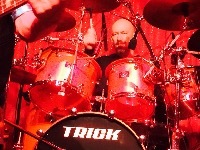 Born in the latter 1950s (yes, I'm old so, this may be a long read), in St. Joseph, MI; the child of coffee drinking parents, I fashioned my first metal drums by the early 1960s, using 1, 2, & 3 pound (pardon the unavoidable pun) coffee cans that were available at that point in history. I calculate that I may have even discovered my affinity for metal drum shells before the venerable Trick drums creator and CEO, Mike Dorfman did. Hopefully, I am not alone in my amusement with this distorted observation.

After what seemed an eternity of coffee can playing prowess, I got my first real drum set for my eleventh b-day. I immediately commenced a recovering operation of my cherished red sparkle, faded to pink, pre-owned, Japanese drums. Faux tiger skin felt was my pubescent design call. My flamboyant matching tiger skin bell bottom pants (mom's creation) would see me victimized at the hands of the older kids, more than the tiger stripe drums or, pink sparkle drums alone, could have ever inspired but, I eventually toughened up. Lol!

Through a series of school dance gigs and neighborhood lawn mowing ventures, I funded my first American (Slingerland of Niles, IL) drums. All the while, I was the beneficiary of drum lessons from a white haired lady, who had been a Broadway pit drummer. Subsequently, I arrived at my first day of Junior High School 7th grade band class, already musical notation literate. I continued to learn from any and all available sources. There was no YouTube, Internet, smartphones, etc

In 1975, I was spotted, playing my final H.S. band concert and invited to come audition for a gig at Walt Disney World. I read their book, got the gig and embarked on a learning experience that could never be duplicated at any other place or time.

During that first Disney gig, I attended college as a music major and studied under Robert Petta of the Florida Symphony Orchestra. As a fringe benefit of my gig at the Magic Kingdom or, the considerable influence of the Jazz monsters who were my band mates, I was befriended by fellow Disney drummers and musical giants in their own right, Don Lamond and Harvey Lang. After minimal coercion on my part, I convinced these gentlemen to help me nudge my technique along. May my gratitude never falter. If only, I knew then, what I know now... and humility was retroactive.

I spent the subsequent 2+ decades playing road circuits speckled with Walt Disney Company gigs at their resorts and theme parks. Jazz, Blues, Country, Western Swing, Rock-n-roll, floor shows, or unabashedly eclectic; Live performance or recording; each held attraction for me. Any opportunity to perform music on my preferred instrument was and is always my "happy place."

In 2008 I was settling back into my Central Florida teaching career after a sufficient hiatus. I joined Cactus Jack and the Cadillacs, a baby-boomer retro rock dance band that had already enjoyed a 25 year longevity. A decade plus later, we are, by virtue of our collective age, Rock-n-roll historians or...historical artifacts (historical art and facts) still going like a herd of "battery bunnies." We play for the love of music and the audiences, not for our own egos. Humility is an age-given gift, in my experience.

In 2010, I took a day-gig as a drum shop manager at a back line rental shop which was part of an entire back line rental department in an Orlando production house. I had 65 drum sets with nearly 90 snare drums and over a ton (literally) of cymbal bronze. We were artist support for most of the major drum and cymbal manufacturers.


My job description was to have intimate understanding of all the drums, hardware, and cymbals inventory as well as, all comparable brands and models. In addition to my own personal collection of custom handmade shells and ultra fine boutique drums & pedals, I had unlimited access to the entire drums and percussion inventory, The more I knew about drums, the more obvious it was to choose Trick drums and pedals.


Regrettably, geographic challenges caused me to vacate my position at the drum shop in early 2018. I am grateful for my time with that company and all I learned, during my tenure there.

I would play Trick drums and pedals for their quality and design, even if they were made in Whopping Foghole, Mongolia. However, the fact that Trick is NOT just some American owned company with overseas or, Mexican manufacturing, affords me a sense of pride and pleasure, to know that the money I spend with Trick drums supports American workers, employed at an American manufacturing facility in "Drum City," Chicago, IL. (Arlington Heights, IL, U.S.A.) Trick is a wonderful and uniquely American company.
-